Lassen Volcanic Park is home to its very own wolf pack: the Lassen Wolf Pack. The Lassen Wolf Pack is only the second-known family to make their home in the Northern California wilderness in nearly 100 years. The first family, the Shasta Pack, was discovered in 2015, but has since gone missing from the territory. The 7-wolf pack was last sighted in Nevada.

The Lassen Wolf Pack was first confirmed June 30th, 2017 when the female was trapped and collared.  July 1st 2017 3 wolf pups were discovered. Researchers placed cameras along remote trails throughout Lassen and Plumas County and were able to capture shots of the two adult wolves roaming together as well as their three adorable pups playing. In addition, they collected scat samples that helped to determine that the male wolf traveled to Lassen from Oregon, where he was originally part of the Rogue Pack. The biologists worked with the Fish and Wildlife Department to catch and collar one of the female wolves. They hope to use the evidence they gathered to reach a better understanding of her eating, reproductive, and survival practices. In July of this year, it was discovered that the pack has produced a second litter of pups. The pack now consists of 8 pubs and 2 parents, bringing the number up to 10.

The Lassen Pack has been spotted just outside Chester in the meadow not far from the Olsen Barn and northern shores of Lake Almanor as recent as August 15, 2018.  The pack covers a wide area of Western Lassen County as well as Northern portions of Plumas County and Lassen Park.  If you happen to see a wolf, please report it to the California Dept. of Fish & Wildlife t 530-225-2300 or online at https://www.wildlife.ca.gov/Conservation/Mammals/Gray-Wolf/Sighting-Report.  Reporting sightings and wolf activity not only helps biologists monitoring the wolves but also local ranchers.

Gray wolves are a beautiful subspecies of wolf that range in color from dark gray to black and even all white. Many people see similarities to other canines like Malamutes or German Shepherds. Though the gray wolf is one of the world’s best known and well-researched animals, its fate is uncertain. In 2014, the California Department of Fish and Wildlife added gray wolves to California’s endangered species list. Gray wolves were once nearly extinct in the lower 48 states, but they have slowly been returning to areas in the Great Lakes, Northern Rockies, Southwestern United States, and parts of the Pacific Northwest. However, the U.S Fish and Wildlife has recently signaled that they may be stripping legal protections for wolves across the country, which could reverse this progress and, because gray wolves are pivotal parts of the ecosystem, could have far-reaching effects across the environment. That’s why the Lassen Wolf Pack is so important to both the local community and to animal lovers all around the country. Local researchers are committed to tracking, studying, and protecting these creatures to ensure they continue to thrive in our part of Northern California. If you visit Lassen Volcanic Park any time soon, just remember you are sharing the land with a family of gray wolves who call the park home.

Use this handy chart to distinguish between wolves, coyotes, and dogs, courtesy of the California Department of Fish and Wildlife.

Take the fun 20 image online quiz for determining if you are looking at a wolf or coyote. The quiz is produced by Oregon Department of Fish and Wildlife.

For current reports on wolf sightings and and other information visit:  http://www.lassenpack.com/latest-news.html

Planning a trip to Lassen Volcanic Park? Book a stay at the historic St. Bernard Lodge, conveniently located near Lassen and Lake Almanor. 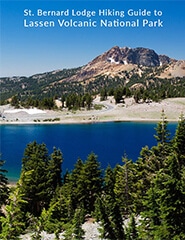 Get the latest news from St. Bernard Lodge and what is happening at Lassen Volcanic National Park.

reserve
Call US
Scroll to Top